Last month in Sydney Shared Value Project launched the results of the inaugural ‘State of Shared Value in Australia’ survey with partners Social Ventures Australia, Republic of Everyone and AFR BOSS.

The sell-out event, hosted by NAB at the Museum of Contemporary Art, coincided with the release of the August issue of AFR BOSS magazine, which featured key highlights from the survey findings and Australian examples of shared value in practice. Joanne Gray, Editor of AFR BOSS moderated the panel of shared value leaders which raised important points around around wide-spread adoption of shared value in Australia, and the acceptance of societal issues as business opportunities.

The release of the survey has kickstarted significant conversations about the current state of shared value in Australia, not only on the day of the launch with live social media coverage, but also through coverage in numerous media and industry outlets. 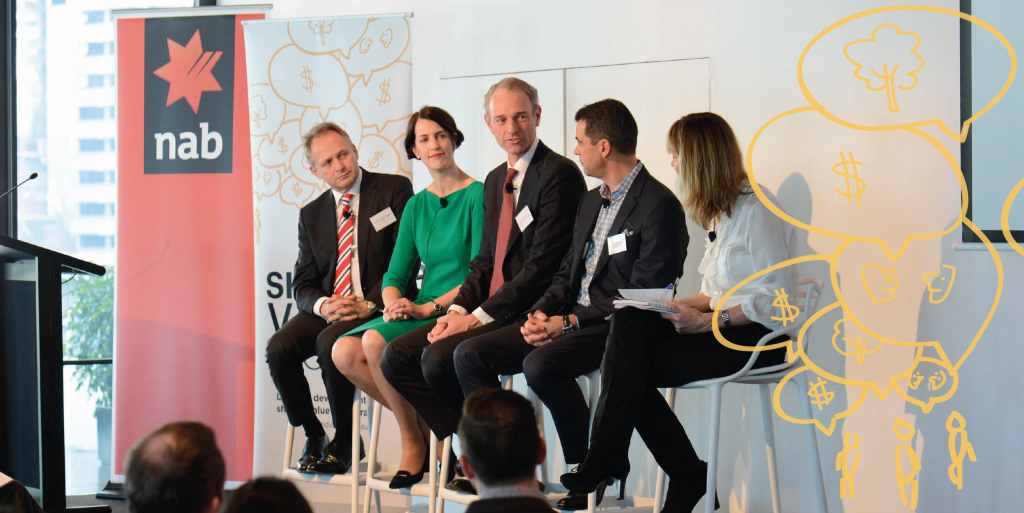 The event was opened by Helen Steel, Executive Director of the Shared Value Project, and Gillian Turnbull, Director of Consulting at Social Ventures Australia (SVA), who gave an overview of the key findings included in the survey report also released on the day. Undertaken by the Shared Value Project and Social Ventures Australia, the survey engaged more than 41 of Australia’s leading companies. The survey results show there is much activity and whilst there are challenges, companies pursuing shared value strategies are experiencing social and economic benefits as well as positive brand associations both internally from their staff as well as from external stakeholders.

The introduction was followed by the panel discussion with Paula Benson, Executive General Manager of Corporate Affairs at NAB, Martin Brown, General Manager of Confectionery at Nestlé Australia, David Harrington, Group General Manager Strategy at IAG, and Rob Koczkar, CEO of Social Ventures Australia. There was a consensus among the panel that the current barrier to widespread adoption of shared value is that the Australian business community and the community at large are still struggling with the concept of societal issues as business opportunities. The panel added that we must move beyond this and accept that it is okay to share in the economic benefit that might be available from addressing environmental and societal issues.

The team behind the survey and report: Darren Bednarski, Gillian Turnbull from SVA, Helen Steel from the Shared Value Project, and Bend Peacock from Republic of Everyone