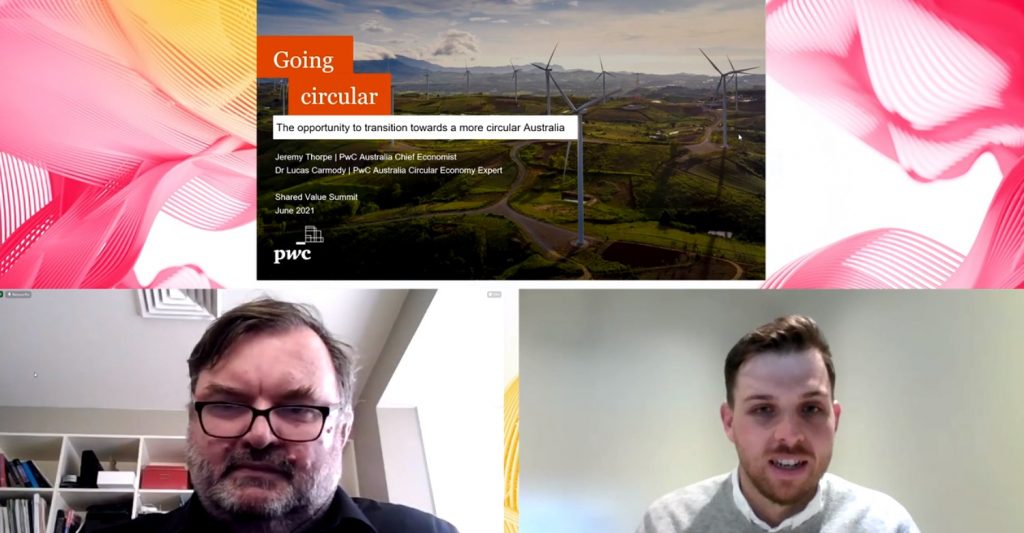 As the global population balloons to a projected 9.8 billion by 2050, the need for a sustainable use of resources has moved from best practice to a business imperative. One thing is clear, it’s only a matter of time before government regulate businesses that fail to find sustainable solutions, according to sustainability experts at PwC Australia.

This is what prompted us to devote an entire session to the circular economy at this this year’s Shared Value Summit Asia Pacific—broadcast live from Melbourne on 17 June. Led by PwC’s Chief Economist Jeremy Thorpe and Associate Director Dr Lucas Carmody, Summit participants were presented with research on Australia’s opportunity to transition to a circular economy.

Addressing a 500-strong audience of corporates, and representatives from across government, community organisations and academia, Lucas explained: “The circular economy is so much more than recycling. It means closing the loop of materials and energy cycles, so that all materials operate within a closed system, and waste is fundamentally viewed as value leakage”.

According to Jeremy, with this challenge comes opportunity, especially for companies on the front foot. Not only are they building resilience to climate change, reducing material costs, and building brand equity, but they are also shaping Australia’s regulatory future.

“We think there’s a real opportunity to move early [as] many regulatory frameworks are still being developed. Companies at the core of [the transition] are being consulted and will shape outcomes that will affect the industry [at large]. Sitting on the sidelines isn’t in a company’s best interests,” said Jeremy.

The presentation came a decade after Harvard professors Mark Kramer and Michael Porter kickstarted the shared value movement with their seminal article, Creating Shared Value, published in 2011—a time when “circular economy” was part of few businesses’ vocabulary.

Today, being across the transition is critical. While the linear model of source, make, use, and waste has been one of “prosperity,” Lucas noted that since the 1970s, “demand for resources has exceeded what the planet can produce, [and it’s] increasing exponentially”.

The problem isn’t just ecological, with many businesses facing threats to their bottom lines, Lucas said. “Resource scarcity means uncertainty around the availability and flow of raw materials. And this can lead to higher prices.” In fact, “climate risk could reduce companies’ value by two to three per cent, with some sectors like utilities standing to lose between five and six per cent on average”.

First movers are already reaping the benefits. Over the last decade, “brands with a higher sense of purpose have experienced more than double brand valuation increases compared to the median growth rate. And this trend is confirmed by the number of ecofriendly start-ups we’re seeing,” noted Lucas.

Australia aims for an 80 per cent resource recovery rate by 2030, though lacks a federal net-zero emissions target. The states and territories are leading the way, with the ACT and Victoria already having legislated their own targets, set for 2045 and 2060 respectively. Others will follow, and as aspiration becomes legislation, the advantages to sustainable business models will compound, said Jeremy.

It’s happening worldwide, with or without Australia’s participation. “We’re seeing globally a number of different regulations, from carrot through to stick… The early adopters are a lot better placed to deal with regulatory pressures we know are coming down the line,” said Lucas.

Even with government pulling every lever, however, Australia’s transition to a sustainable future is in the hands of business, Lucas told the audience. Ultimately, “industry is going to drive the next wave of innovation to promote a circular economy.”

Missed this year’s event? Don’t fret! We’ve launched a first-ever on-demand ticket, to give you access to the Summit’s full program of keynotes, panel discussions and lightbulb presentations for the next three months. Find out more by visiting svsummitapac.org.