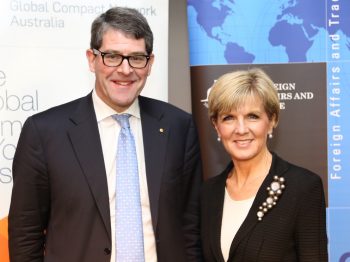 Julie Bishop is the Minister for Foreign Affairs in Australia’s Federal Coalition Government. She is also the Deputy Leader of the Liberal Party and has served as the Member for Curtin in the House of Representatives since 1998. Minister Bishop was sworn in as Australia’s first female Foreign Minister on 18 September 2013 following four years in the role of Shadow Minister for Foreign Affairs and Trade. She is also a Fellow of the Australian Institute of Management, was inducted into the WA Women Hall of Fame in 2011 and is currently the Deputy Chair of the Western Australian Museum Foundation and a Board Member of His Majesty’s Theatre Foundation.